We offer a variety of tile roofing options for homeowners in San Antonio. The most common type of tile roof is concrete but clay tile roofing is also a great option. Metal tile is also gaining in popularity as well. We use a variety of tile manufacturers such as Boral, Santafe, Terreal and Claymex. Within different brands there are many different styles such as barrel, S tile, Spanish tile and more.

Tile roofing is a gorgeous choice for your home. It is long lasting and complex to install so it is important to choose a contractor that has had lots of experience with tile roofing. Working with this type of material is specialized even within the roofing community. Tile is heavier than other materials so it is advisable to have an engineer look into the home structure before switching from one material to tile.

Pros And Cons Of Tile Roofing

Tile roofing can last a lifetime in some cases but the cost is expensive compared to other roofing materials. It is also very heavy compared to shingles or even standing seam metal roofing. It is great for areas of high heat like here in San Antonio and they are very energy efficient. There is very little maintenance with the exception of replacing any broken tiles that occasionally happen. There are lots of colors are styles to choose from. Chances are there is a style of tile and color that would look great on your home. It is also extremely fire resistant. Tile is environmentally friendly and can be recycled as well.

The downside of tile is that it is expensive and installation is difficult. It is more time consuming than a standard shingle roof. It requires dumpster and sky lift rental and your home is a construction zone for a longer period of time. Walking on tile roofs can cause breakage as well. The structure of your home and rafters have to be sturdy enough to handle the extra weight too. 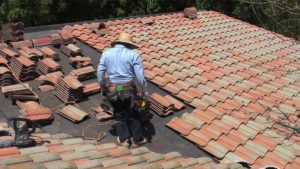 Concrete tile has a high water absorption rate than clay and this makes it more prone to staining and mildew. This fact could also make concrete tiles heavier as well. Clay tile are very durable but they do crack easier than concrete. Constant expansion and contraction due to temperature changes like we have in San Antonio can cause clay to crack. This is the reason that concrete is most often the choice for colder climates. Still yet clay is still more durable than concrete and is one of the most durable roofing materials.

I wanted to go over with you the option of slate tile roofing as well. There are some pros and cons but overall this is a gorgeous roof choice. Just like concrete, slate is heavy and requires stronger rafters and an engineering report may be necessary. It is a beautiful product made of natural metamorphic stone and has been used for hundreds of years. It is fire resistant as well and very durable. Although hail storms and walking on the roof can cause these tiles to crack or break. Cost is also a factor as materials and installation can get up there in pricing.